END OF AN ERA

After a lot of procrastination, I’ve started sorting through about 25 years of old film images.  I haven’t shot one frame of film in over ten years now (I don’t even own a film camera anymore).  To be honest, it’s an extremely rare day when I have any reason to search for a film image…so a major housekeeping project has finally begun: I’m getting rid of as much of my film archive as possible.

I have seven four-drawer file cabinets crammed full of 35mm slides stored in 20-slide archival pages, ten pages to a hanging folder.  These are sorted into broad categories, such as birds, mammals, national parks, autumn color, etc.  I’ll be going through each section and pulling the shots I think worth keeping.  In the film days we all shot and kept duplicates of the exact same image, as multiple originals were needed to send out to magazines, books, calendars, and other possible publications.  Even having just started on this project, I’m amazed at what I kept way back when.  Yes, there are some good images, but there is also a lot of stuff that should have been ditched back at the time.  As I look through the files, I keep saying to myself “If this is what you kept, just how bad were the images you threw away?”

While the bulk of my film work was done with 35mm Nikons, I also used a Fuji 6x17cm panoramic camera for several years, and two 6x7cm medium format cameras, a Pentax 67 and a Horseman roll film view camera.  OK, there’s another whole file cabinet full of mounted images.

I’m hoping to get all this down to one file cabinet filled only with “keepers,” although that might take several passes through the files.  All the tossed film is going to a professional shredding place.

But I still have all the peripheral stuff: slide pages, labels, mounts, protective sleeves, and several large light tables.  Plus slide projectors and slide trays.  Anyone want this stuff? 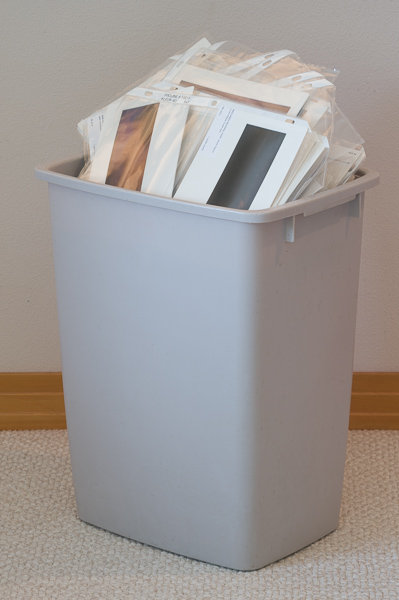 This entry was posted in Commentary.