With some sadness I’m announcing that I will no longer be adding to this blog.  The world has changed rather drastically since spring 2020, affecting all of us is so many different ways.  I’ll still be photographing (I can’t imaging not doing so) but I will no longer be blogging, or leading workshops or tours.  For now, just a quiet “goodbye and thanks for reading.”

BEFORE THERE WERE DRONES….

That’s me at Michigan’s Jordan River in autumn 1975.  And yes, I carried that ladder out into the river in order to get the photo angle I wanted.  I’m using a homemade “centerpost extension” to gain height, with a bungee cord stretched along the side to dampen vibration.  A Nikon F2 is mounted on the tripod (lens unknown, but a gel filter holder is on the lens) and I’ve got a Nikkormat on a neckstrap.  This was taken on Kodachrome 25, just introduced the previous year replacing Kodachrome II.  ISO (ASA back then) of 25, hence the name.  K25 was my standard film until Fuji Velvia came on the market in 1990.  While I have this image I can’t find any of the ones I must have taken that day, which might be a comment on the resulting quality.  Interesting what you find while “sheltering in place.”

In my last blog I stated that I was debating about continuing writing here.  After a lot of though I’ve decided to do so.  I still remain depressed and fearful as to the current political situation here in the US.  My feelings are not just as a citizen but also as a nature photographer.  This past week two National Monuments were opened for “development,” although I’m not quite sure that “development” is the correct way to say “mining” and “resource extraction.”  Being a nature/wildlife photographer is only possible when there is actual nature and wildlife to photograph.  Shrinking the size of natural areas, privatizing parks and recreation areas for profit, selling off public lands, and repealing clean air and clean water regulations directly effect all of us who photograph the natural world, no matter our personal political views.  I strongly urge readers to get involved in both local and national conservation efforts.

You have probably noticed that I have not written anything for quite a long time.  Right now I’m not sure whether I will or will not continue this blog.  For me, this year has been simultaneously very good and very bad. You might remember the “best of times, worst of times” opening line from Charles Dickens’ Tale of Two Cities.  The actual full sentence reads:

Photographically this has been a great year for me.  I think I’ve taken some of the very best photos of my life this year.  And I’ve recently started working with the new Nikon D850, which I consider to be by far the best Nikon camera I’ve ever used (and I almost hate to admit just how long I’ve been a Nikon shooter, going all the way back to my very first Nikon camera, a Nikon F Photomic that I bought in my sophomore year of college).

I’ve continued to travel widely.  I’ve made a few of what I call my “last-time trips,” repeat trips to the exact same locations at the exact same time of year, journeys that I do not plan on repeating one more time.  These destinations include Japan in winter (snow monkeys, Steller’s sea eagles, red-crowned cranes, winter landscapes), Iceland in winter (frozen waterfalls, glaciers, icebergs on black sand), and, starting a week from now, the sub-Antarctic islands and the Antarctic Peninsula.  I’ve done each of this trips multiple times, and simply want the opportunity to photograph other locations during the same time frames.

Yes, the best of times has been very good indeed.  I’m in pretty good health, still mentally functional (although that’s always debatable), still an avid and compulsive book reader, and just as curious about the world as I’ve always been.

So what’s this “worst of times” bit?

First a bit of background info.  I came of age in the civil rights movement of the 1960s.  Yep, that just gave you a hint about my age.  I was involved in the Vietnam era, and the Nixon debacle.  But over all these years I believed America would become a better country, a better people.  I felt truly blessed to be an American.  I love this country.

And then 2017 happened…and I started needing to apologize for America during my travels abroad.  Environmental regulations rescinded, climate change denied, immigrants demeaned and threatened, civil rights ignored, white supremacy in the open and applauded, politics by 140 characters, and facts called fiction with no objective truth allowed.  I’ve become extremely pessimistic during this year about the future of our country, and, for that matter, pessimistic about the continuation of human life on this planet.  Nuclear war is not a casual option to be dismissed in the same cavalier manner in which you would a sports rivalry.

Yesterday Robert Mueller revealed charges against three former Trump campaign officials.  Is there a glimpse of the proverbial light at the end of the tunnel?

It’s been a while…

It’s been quite a while since I wrote a blog piece.  A lot has happened this summer and fall.  Back in April I added a D5, and then a D500, to go along with my D810 cameras.  I made extended trips to Iceland, the Galapagos, Spitsbergen, Brazil, and southern Utah.  On the home front, at the beginning of summer we contracted a major house remodeling project which still isn’t quite finished.

And then there was the accident.  Several months ago, while driving home, I was slowing for a traffic light with three or four cars in front of me.  Just as I was almost stopped, the truck in back of me failed to brake and, while still going about 35mph, smashed into my vehicle.  This shoved me into the SUV directly in front of me.  My vehicle, a full-sized Chevy 4×4 pickup with a popup camper on the back, was totaled, smashed both front and rear.  The guy who hit me had been talking on his cell phone, totally distracted.  I’m all OK now, but it has been quite an experience, one which I definitely do not want to repeat.

UPDATE November 25:   I certainly appreciate all the comments and concerns.  Yes, I’ve totally recovered now, at least as good as I’m going to be at my age.  Plus I have a new truck and repaired camper.  So…if you see a white Chevy extended cab 4×4 pickup with a Four Wheel Camper popup in the back and a geezer at the wheel, stop and say “hello.” Again, my thanks to everyone.

I just got back from an extended trip to learn that Larry West died on December 15.  Larry was an exceptional photographer, a great naturalist, and a good friend.  He was an enormously helpful to me at the very start of my career, and was indeed extremely generous with information, advice, and encouragement to a whole generation of nature photographers.  In the mid-1970s he and I started offering week-long photography workshops in Michigan which, to my knowledge, were about the first field workshops anywhere in the US specializing in nature photography.  After my work took me in a different direction, he continued these workshops on his own.  He also authored a series of well-received “How to Photograph” books.   Larry’s presence will be missed by many.

If you’re an Adobe Camera Raw user, rather than a Lightroom user, I might point out that the new “merge to panorama” and “merge to HDR” options are also available in Camera Raw 9 if you’re running Photoshop CC.

In Bridge, select the images you want to use, and then open those images in Camera Raw.  Once again, select all the images and then click to see the new options.

Click “save” but do not close Camera Raw, and the merged image will appear as a DNG file at the bottom of the Camera Raw filmstrip, and can be processed in ACR as you would any RAW file.

As with Lightroom, a merged HDR file in ACR will now offer plus/minus 10 stops on the exposure slider, a total of 20 stops.

A couple of weeks ago I was in White Sands National Monument, when a rather rare event occurred for that area of New Mexico.  It had rained for two days, so there was a lot of moisture in the sand.  But the first morning the weather cleared the photography conditions were magical for a few hours.  The overnight temperature had been in the low 20s and frost had formed on everything, while during the early hours a thick fog layer formed, low to the ground.  Wow!  Frost and fog together, a combination that lasted for only a few hours. 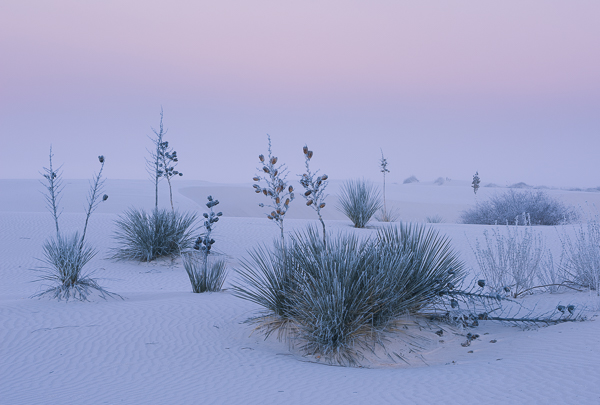 Yesterday I had to scan a Velvia slide from my files.  Yes, for those of you don’t remember the “old” days, there was a thing called “film” which had to be digitalized before you could use Photoshop on the image.  A film scanner was the answer.  But, a dedicated 35mm film scanner (rather than a flatbed scanner with a film holder) is now quite a rare beast.  I’m not sure such a thing is even manufactured any more.  I have a long discontinued Nikon Coolscan 4000, which is certainly adequate for magazine-sized reproduction.  The problem, however, is getting the scanner to work with any current computer operating system.

I’m running Windows 7 64-bit on both desktop and laptop machines, but Nikon scanner software was written many years before this OS.  I guess I could have kept an old computer around, but no thanks, I don’t want to do that.  So how have I been able to use my scanner — infrequently though I do — along with Nikon Scan software on my current machines?  Ah, Google to the rescue.  Type in “how to use a Nikon scanner with Windows 7 64” and this link appears (there are other links but this is the one I used):

In my opinion, one of the main reasons (if not the main reason) to use Photoshop is the option to make and use masks, which allow a correction or adjustment to be applied to one specific area of an image.  But actually selecting that specific area can be extremely difficult, especially if there are fine, overlapping details,  Trying to use the standard selection tools such as the lasso or magic wand is far too often a lesson in frustration.  Selecting by luminosity, by tonality (how light or how dark a given area), is a much better way as this luminosity selection is based on the image itself and consequently will make a self-feathering selection.

Quite a few years ago I learned about making luminosity selections from Tony Kuyper’s website, www.goodlight.us.  In fact, I wrote about luminosity selections, and Tony’s Photoshop actions to make these selections, in some of my early eBooks on Photoshop.  Over the years Tony has refined his actions, and recently he produced a completely new Photoshop “Action Panel version 3.”  I’ve used his previous actions, but his latest panel is amazing.

Here’s the link about the panel:  http://www.goodlight.us/writing/actionspanelv3/panelv3.html.

And the purchase link (see the “special offer” at the bottom of the page):  http://www.goodlight.us/specialoffer.html.