As was well reported, southern California experienced a “superbloom” this year.  I drove down from my home in Oregon and spent just over a week photographing at two locations relatively close together: the Carizzo Plain National Monument, and a site just north of the California Poppy Reserve.  And yes indeed, the flowers were a spectacular sight.  I wanted to work locations that were not overrun with “petal peepers” (as one of the news reports named the thousands who visited certain spots) and my choices worked out well.  Neither location offered nearby motels, but having a truck camper let me stay on-site and be out both early and late.

The biggest problem I had was weather.  More specifically, windy conditions.  This was especially true at my poppy site.  The fact that a wind farm is located right next to the Reserve was certainly an indicator of what to expect.  Focus stacking for depth of field was impossible due to the wind, but having tilt/shift lenses saved me.  Using the tilt feature I could reposition the plane of focus on the flowers for near-to-far focus while still working at an optimum aperture and a low ISO.  Tilts to the rescue!

Here’s a shot from my poppy site, taken with the Nikon 24mm T/S lens. 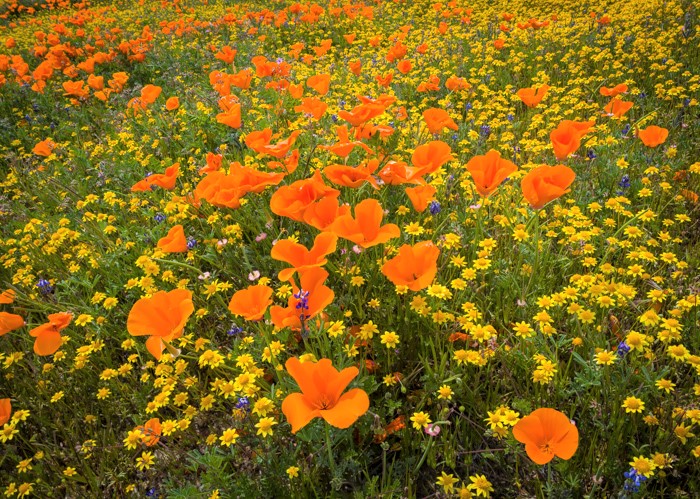 This entry was posted in Gear, Location.